Cross Stitch Pattern of Fluttershy’s brother Zephyr Breeze from My Little Pony Friendship is Magic. Thanks to Cheezedoodle96 for the vector I based this on. Download the PDF here: Zephyr Breeze Pattern

Help me make more free patterns by donating to my Patreon. 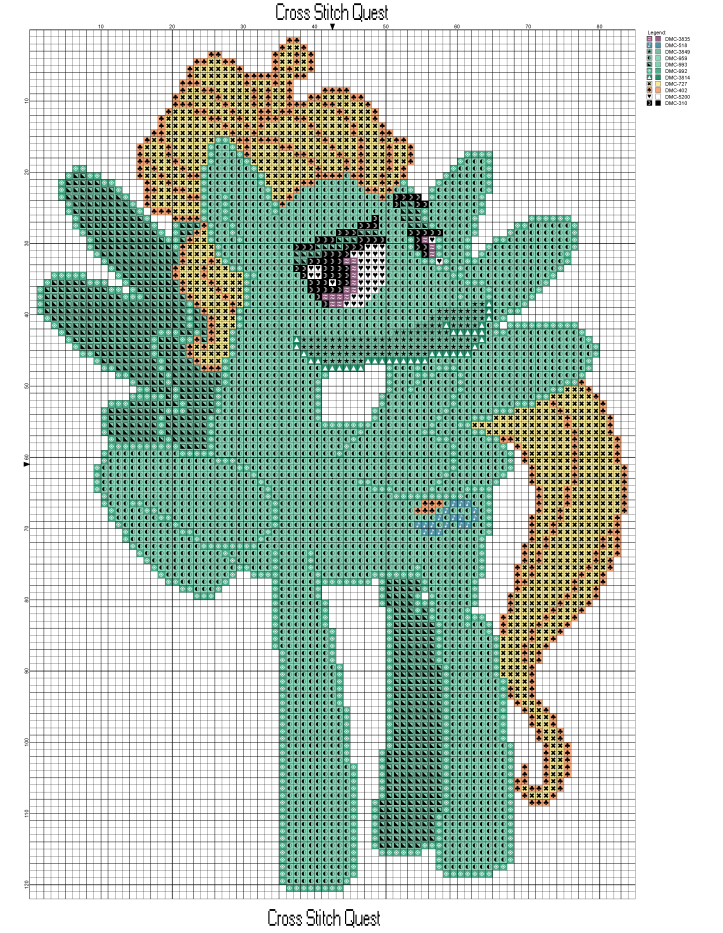 The episode Flutter Brutter is one of my favorites. Not only do we get to see Fluttershy stand up for herself, we finally get to see the secret family she’s been hiding from us all these years. I love Fluttershy’s parents and how they get characterization even during their brief screen time. We see her dad has an endearing connection with his job through his cloud collection and there’s a moment where they lament not being as assertive as Fluttershy. These motivations let us see their struggle as separate from Fluttershy’s in an episode where they aren’t the focus, which is pretty neat. Props to Dave Rapp on this one.

I have mixed emotions about Zephyr breeze, but not in a bad way. He’s a top notch character who makes me feel equal parts frustrated and guilty in a way. He’s a grade A tool bag, but I really empathize with his struggle. I think about how under different circumstances, I could have turned out just like him. Whereas I turned to the ignore the world approach to confronting my own failings in life, he’s gone down the route of arrogance and self aggrandizing despite his multiple flaws. I can see how growing up in a family of pushovers could make you believe that you can do no wrong, and it’s a tribute to the writing here that all of this is so easy to understand. The idea of shooting yourself in the foot hits really close to home for me and probably does for a lot of older viewers. You can’t fail if you don’t try and you can’t hate yourself if it’s the world that’s wrong.

I can see how younger viewers might identify more with Fluttershy’s role here. I know that I for one felt responsible for my family’s happiness as a kid. I think it’s an important lesson to teach children that even though someone is family, it is not your responsibility to fix them. Fluttershy makes a stipulation that Zephyr must get a job in order to live with her. She sets a clear boundary and when her brother fails to respect their agreement, she follows through with kicking him out. This is a healthy response and I love how this action enforces her character growth from the breezies episode. I also like how she went to check on Zephyr, since just because you have boundaries doesn’t mean you can’t still love someone. She just finds a different way to help and everything works out in the end.

I know that this review is more serious than my usual, but that’s because I feel that the lesson in this episode is important. Just like the Steven Universe episode Mindful Education, Flutter Brutter tackles a lesson that too many adults haven’t learned yet. It’s hard to do an episode on the complex concept of enabling, but MLP managed to pull it off.